I am an alley walker. A junk devotee fascinated by the mass of horrid and wonderful things found in back alleys. I value both treasure and trash. Alleyways are the ultimate liminal space in our culture. Inhabiting the halfway between civilization and rat paradise, they’re filled with forgotten items people can’t bring themselves to throw away forever. Shit that with enough duct tape might one day be sold on the leftovers table of a garage sale. Or tossed forever when the owner dies and there’s no one left to justify its value.

I became an alley enthusiast because of my father. Every now and then we’d miss Sunday morning Mass in our small town of Manvel, North Dakota. When this happened we’d lug ourselves fourteen miles to Grand Forks. There we’d attend the five p.m. service at Saint Michael’s. Missing church was never an option. I can only recall three instances where I didn’t show (sick, storm, and fake sick — though one time I did throw up in Sunday school and my uncle had to clean the mess).

Saint Michael’s was best known for its lack of air conditioning in the summer. They set up a couple yellowing box fans at the front to cool off a congregation of five hundred. After sweaty Mass at Saint Mike’s, if my dad wanted to treat us to a good time, we’d go alley cruising. Even if my mom rolled her eyes at the proposition it always meant an hour of goofy fun. What this entailed was simply driving our car through the residential alleys of downtown Grand Forks.

My dad captained and we crept through the alleys to take everything in. Also because there were enough pot holes and broken sinks to break your car’s leg and give it tetanus. Each alley was unique and hopefully always better than the last. We’d try spot the most bizarre, downtrodden, and filthy shit imaginable: Broken toilets, piles of beer bottles in banana boxes, cracked paint, cars with their doors ripped off and dying weeds growing through the cushions. Old couches, busted vacuums, and crippled van owners who like to rape in an air conditioned environment: 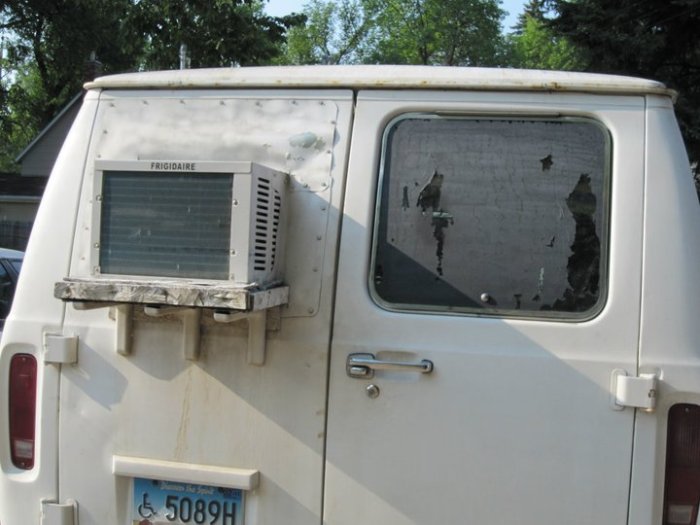 When a fun item was spotted we’d pull in closer for a better look. Usually the magnified view revealed something worse. A pink piece of plastic tied to a propane tank on a rusted camper turned out to be a deflated flamingo. A stack of wood would be full of beer cans and dead bugs. So alleys were fun to investigate but often best viewed from afar.

I can’t recall ever getting out of our car. To step out in the alley would be gross. It’d cross too far into a world gentle churchgoers weren’t meant to inhabit. They were best viewed while buckled to a backseat. But I always had the urge to investigate them up close. To touch and sniff the things we found. So last summer I did.

Here’s the cast of characters you should know:

Blair and I were going to an afternoon movie and had hours ’til showtime. The plan was to walk around downtown or hang riverside if the mosquitoes were already sated with the blood of others. I decided to cruise by where a friend used to live. We cut up an alley to get there. Walking through it reminded me of those Sundays spent looking at stuff through dirty car windows. I told Blair the stories. She was more fascinated by my fascination than having any genuine interest in alley tales. But soon enough we decided to spend our afternoon alley walking in the hot sun. I was slightly hesitant. This venture could risk erasing the childhood associations of magic I felt in this world.

I thought I’d end up like Young Goodman Brown — chasing pink ribbons once tied to something pure, but now left with cynical association. Thought I’d forget the great times I had with my family. The ones where my father narrated fictional histories of the junk pieces we found. His voice booming like a carnie attracting your attention to a trinket. The car crawling through narrow mud paths after a priest’s lecture on premarital ejaculation. Memories perhaps to be replaced like Christians unconsciously initiated into a witches’ sabbath. But instead it made me fall in love with every hunk of shit Blair and I came upon. Made me wish I’d gotten out of the car years before.

Alleys are a product of what could be considered low culture. But I think there’s lots to be appreciated in them. They’re visually interesting in a way that’s distinct from the common world. They possess combinations unseen anywhere else.

I find so many things that shouldn’t be, but that’s what makes it so fun. I know I’ve hit a good alley if I find myself muttering any of the following:

This is an ignored form of urban exploration. Because the alley hides in near plain sight it comes close to being disregarded. Yes, virtually everything in them is trash. But some of that trash is fucking interesting. Especially when it makes no sense, is unapologetically junky, knows it’s valueless yet once tried to be something better, or fuses the outdated and broken with the new. Everything there dares to be looked at. Has to be looked at.

Example of an alley garbage pile that is both fun and essential.

Blair and I spent a couple hours alley walking that first day. Despite the heat there was no bad smell. But our shoes got muddy and we stepped on unpleasant things. No matter. It was so hot we’d stop for water or rest in the shade next to whatever waste we’d come upon.

She had a camera we used to document any interesting thing we uncovered. I wanted to show my dad our finds because I knew he’d be excited to hear I’d returned to alleys after all these years. That I’d inducted Blair into the lifestyle, willingly or not. I told her stories about those Sunday drives and how much fun we could get out of something so simple.

We’d take our dad’s salmon pink 1957 Chevy Bel-Air out for its yearly spin and would inevitably end up cruising alleys. It was a thrill to be hunched and unbuckled in those vinyl seats when Dad punched the gas. To be looking out half rolled windows at the mountains of trash and yard figurines caked over with dirt. My dad kept great care of this car. Over forty years after its production it was sailing through heaps of things left untended. We were in something so old yet newer things around us were much more decrepit.

Blair and I strolled the alleys slowly but sometimes kept a brisk pace if nothing caught our eyes. Not every alley registers a hit. But many do. I’d stop to snap a photo of some collapsing shed of sticks and toys without announcing it. It didn’t take her long before she gained this same eye for good things, even if her tastes were different. She’d spot something nice as often as I and would use the camera to document her find. I was inducting someone new into an old family practice.

After that first day I went solo a few times while Blair had work. It helps to have a partner when doing this exploring. It’s also best to do it in the afternoon when most people are at their jobs. Without Blair I felt awkward coming upon folks mowing their lawn aside the alley, shirtless and smoking a cigar. People chopping wood beside my glory piles. They’d see me a half block back taking photos of dirty plastic turtles atop a garbage pile. I kept my earphones in and eyes down. With Blair it was easier as we could talk to each other as we walked by the confused folks. But on my own I was just a creepy guy digging through their trash. The one pressing the photo button for milk crates, overturned hot tubs, and dead cars.

Once Blair and I ran into these two people in motorized wheelchairs cruising down an alley. They sped at top speed and stared straight ahead. Eventually they parked outside a gas station across from the homeless shelter where I suspect they lived. I didn’t really care that they were in chairs. It was that they looked bizarre driving side by side in unison without acknowledging the other. Perhaps they were a couple in love. To me they seemed like something from the alley floor sprung to life. It was mean spirited to film them, but at the time I had more of a tendency to be an insensitive prick:

Our enthusiasm for the project really only held for a week or so. It was best to walk for an hour, hope for a couple great finds, then call it a day. We traversed most of downtown and had fun chatting while snapping photos of these forgotten, decrepit things. The best part was getting back in my car and talking about the find of the day or something creepy we’d spotted. Later I’d click through the photos on a computer, thinking about the day. About all the great finds and conversations. It was pretty awesome.

We did enough alley walking for an entire summer during those couple weeks. Come September I drove to Washington to visit my sister in Olympia. I was hoping to do some exploring there but alleys didn’t really exist like they did in Grand Forks. Those that did were mostly in business districts and weren’t populated by anything but black bags. There were graffitied bricks and spilling trash cans. I love a spilling trash can as much as the next person but it wasn’t the same.

I don’t know if I’ll be an avid alley walker next summer. I live out on the left coast in Portland for now and haven’t been able to find much in terms of quality alleys. But when I do I like to turn in and cruise through. Not slow like my dad, but not fast either. Maybe one day soon I’ll park my car and walk down a muddy road behind a row of houses, seeing what absurd things I can find. What fun there is to be had.

I’ve never taken anything out of an alley. These things are already in their proper home. The world’s built me a museum and I do my best to preserve it. I give those items what love I can in my appreciation and pictures. So perhaps artifacts of alley culture should only escape through photographs and memories. But maybe one day I’ll pocket a piece so it may live a little longer. Only I will notice what’s missing. And with all that it forgets, the world will replace it soon enough.