Skip to content
gabfrab in music festival, travel 06/14/201402/20/2020 1,646 Words
Last Bonnaroo I slept beneath a car and below a dinosaur battle. This combat took place atop a card table extending off the bumper of my ride. Ants bit me at night, leaving itchy hickeys behind. I scratched at their affection. A roll of carpet acted as barrier between me and the long and dewy grass. I used mats and a tarp to blot the sun while still keeping a breeze across my body. I later discovered the mats to be those my country dogs have sat on for years with matted fur and tick-riddled bodies. For four days I sniffed my crotch and pits, unable to pinpoint why I smelled of an open grave. It was under these conditions I’d receive my rest. It came after tiring days of music and wonder beneath sun and starlight. I was loving the experience, finally feeling a joy after a year of lonely living in Minneapolis. Roo was the reset I needed — a catalyst for recalibration. I was already planning for the next year, figuring I’d upgrade to a shade canopy and more monsters for the battle.

Throughout the fest I carried a free candy dispenser that anyone could pluck from. I like to have some little thing to spur interaction at festivals and so designed the treat machine. This helped me depart from my solo-ghost ways and talk to people, if only in moments. The dispenser was made from a baby doll in whose head I drilled holes. Each was filled with suckers and licorice that melted in the intense Tennessee heat. The contraption sat on the back of my pack. People who wanted some pulled their piece out the baby’s head. Again I was already thinking of upgrades, envisioning the infant upside-down with a plastic barfbag over her head. From her crotch would grow flags and flowers.  I’d glue lighters to her hands and have cigs and suckers planted across her upturned feet.

It was my best Roo yet, which is something I’ve noticed I say every year. I saw tons of great shows, pointed a Big Mac at Paul McCartney, and discovered that camp neighbors used my table for their coke-snorting platform. I developed seven hundred crushes but acted on none. Within toilet walls I sprayed jizz across feces from people raised around the world. Matt and Kim called for the crowd to bodysurf while fucking. I was in the thick of this. There were dozens of people passing above, all with their dicks and pussies zipped-in. That’s too bad as I was hoping to bury my face in something that smelled of dog dick. But the energy was untouchable as I peeped floating people on a sea of hands in every direction. The madness of this all reduced me to uncontrolled laughing in fits of joy.

The final night, Sunday, ended with a drunken rager that stretched ’til dawn. We danced in the rain to music blasted out a sketchy rave truck on Shakedown Street. The official festival closed with Tom Petty but those unready to return to the real gathered at camp aside this mobile music machine. People danced for hours, passed bottles, and a completely naked girl tied glow sticks around her body to illuminate each feature. I didn’t mind. Nor did anyone else. But nobody took a knee to masturbate in the mud. Like every time I see something like this I only thought how cool it was in regards to how comfy she was with her body. The crowd carried on with sharing booze and their final desperate attempts for a weekend hookup. I shared the mini-liquors hid in my shoes and drank from the endless supply passed from person to person. It downpoured on everything and yet we squeezed these last drops of joy for hours more. I walked back to camp at 5am, wet, wasted, and ready to pass out. I did just that.

Morning came much too soon. As I woke still wet from sleeping in the backseat I saw how much wonderful shit was being  left behind. I’d read that people abandoned things as if they were kings but had never stayed to see for myself. During Monday’s late morning rain I saw all kinds of folks fleeing with just their cars and clothes. The farm is over 700 acres and holds more than 80,000. So everywhere I looked held the appearance of a once vast city now fading to ruins. A few abandoned canopies were in sight. I was wanting one so as to upgrade my shade from the card table to something more fit for a six foot man. As I sat there I saw pickers combing through campsites and thought I’d try my hand at their craft. I tied a grocery bag to my head, threw a 101 Dalmatians towel across my body, and walked the muddy grounds on feet wrecked from a weekend of dancing. 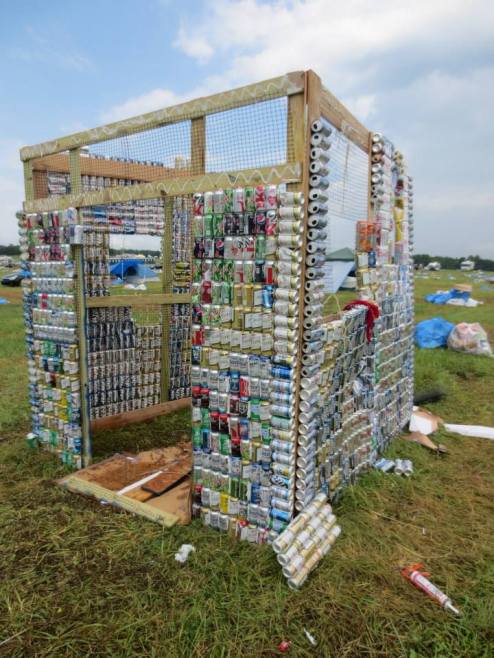 I scored beer, water, Red Bulls, granola, pop tarts, liquor bottles, coolers, chairs, and a brand new $100 canopy. I even took shit I’ll never use like pop and charcoal. I gravitated toward sites where they even abandoned the tent, figuring that’s where the most would be left behind. Upon arrival I’d make calculations as to what I could utilize and what must be passed over. I found enough to fill a semi and even noticed cargo vans cruising the campsites, stopping to load good hauls. But most were on feet like me, filling arms, carts, and backpacks with treasure. These were my people. I grabbed up what I could and carried it back to my car before returning to gather more. Some things couldn’t be be rescued like squeezed-out ketchup and open peanut butters now filled with rain. But food-wise there was enough good stuff to feed both me and every other hog in the county for years. I’d already been eating ground scores throughout the fest though under the cover of night. Now as I went through the abandonment I sucked down melted Oreos from someone’s split-in-half styrofoam cooler. Another scavenger with an armload of chairs passed by and looked on in disgust. “So you’re just eating everyone’s old food, huh?” My fingers were sticky with the melted chocolate, my head still wrapped in a grocery bag. I didn’t mind. The shit was free and that made it delicious. Before long I began imagining all I’d both gather and gobble for the next year. I was gonna upgrade my Roo experience on every level. But in the meantime I took the lessons learned and sprinkled them across the rest of my existence.

I realized there was grift for the taking in all sectors of the real world, a place I only ever drop in on. I became a drink finisher, pulling half-drunk abandoned cocktails off bar railings and guzzling them down. I dug beer bottles from the garbage and swigged ’til satisfaction was had. At other fests I began scouring for gourmet ground food and ate free every time I was hungry. My tummy said thanks and I said you’re welcome. This was never gross to me and actually felt quite right. I spent the summer dispensing alcohol from my “booze trunk” to friends who drank what I’d garnered at Roo. Each time it got me or someone tipsy I was thankful for a free night of fun. For the camaraderie it provided. If I was sleeping alone along the river I’d sit at the fire and drunkenly recall what joy I took in those rainy hours at Roo. From the dancing to the collecting, it was all a wonderful time.

I decided it was time to embrace my low-class, wannabe scuzzball status. I figured I could adapt to the ways of the wook but without their associated sketchiness. No drugs. No theft. No being a passive piece of shit. I’d just spent the last few years feeling conflicted about where I was going in life but finally reached a turning point. I knew I was geared toward cynicism and had to accept that. At the same time I decided to no longer allow it to consume my existence. I consciously chose to be less secluded and unhappy. I wanted to take pride in the roaming and unpredictable lifestyle I was living out. To acknowledge the good and bad in all that. To accept who I knew I was and the things I’d probably never have — a wife, home, and especially children. The way I was living didn’t exactly have a guide and so I improvised as I went along — sometimes failing but now decidedly always moving forward. I became conscious that my life after college was full of freedom, creativity, and unique experiences. It was time to take advantage of living outside the real world.

I grew to love sleeping in my car as I panned it from one corner of the country to the next. To not be embarrassed or worried when I woke to a cop or looky-loo knocking at my window. I learned to pare down even more than before and live comfortably within my meager means.  To never take advantage of or ask for anything but rather be resourceful and discover. To continually scoop at society’s excess. My time became the biggest priority and I spent it on things I more cared for, even if I still wasted plenty. I largely abandoned my listlessness and became conscious every time it tried creeping back. In time my Roo bottles dwindled ’til the booze trunk was once more a mere sleep chamber. I looked forward to resupplying at the next year’s fest. I couldn’t wait to scour the campgrounds come Monday morning. This was my kingdom and grift was my gold. I’d get on all fours, snort like a pig, and inhale it all. I’d be drunk and fat for years to come.