gabfrab in dogs 08/04/201702/20/2020 1,940 Words
Sophie, aka Zort, aka Sophie Soapy Chaka Zort had her last day this week. I knew this was coming but still it’s tough to lose love from your life. Zort was with me for over fourteen years, that time stretching its hand all the way to high school. But the path to have her started long before. When I was young my parents didn’t let us keep pets. Growing up they both owned farm dogs but didn’t want one for our own home. For a short while my big sis fed a stray cat that wandered in from the woods when I was little. The cat was in competition with skunks as they scavenged its food from the porch. It gave birth to kittens then the whole lot of them disappeared, either eaten up or wandered off.

Over the next few years my parents softened to the idea of a real pet and in middle school bought us a dog. She was an American Eskimo puppy from a farm in Minnesota. When we picked one from the litter she was the unanimous choice. I named her Sloopy after a Mad TV sketch parodying Peanuts. Her first night she slept by the sandbox with a teddy bear and warm water bottle. Sloopy was cute and wonderful but only in our life a short while. She’d wait for my little sister and I to get off the bus then “hide” on the driveway as we approached. With all white fur her camouflage was weak but this kept her hidden through the Midwest winter. Her best friend was the teddy bear from her first night at home. It dwarfed her in size but still she took it everywhere, her teeth clenching its foot for easy transport. Sloopy was a perfect fit for our family. But in just two years her time was cut short. She found poison in the garage and bled to death on the kitchen floor. I remember us putting her in a box and rushing to an after-hours vet, her body already limp and lifeless. To this day I keep her ashes on a shelf in my childhood room.

It took a few years but finally we were ready for another dog. That’s when Zort came into our lives. She was an American Eskimo, just like Sloopy, but with a wholly different personality. I insisted on naming her Zort but spelling it “Xouirteeee.” The four “e”s were important for reasons of eccentricity, a trait we later learned suited her well. My mom never liked that name so called her Sophie. These monikers became interchangeable, eventually morphing into the fully ridiculous Sophie Soapy Chaka Zort.

We got her as a puppy and watched her grow and develop into adult life. Sloopy was a squirrel hunter who liked to play tug with her teddy bear. Zort couldn’t hunt down a can of beans and wasn’t much for play. But that didn’t matter. She had the cutest face with a coal black nose and dark eyes set against white and woolly fur. In winter she doubled in size. Her coat changed from the beard of an academic to that of a crack bum angling to put Santa’s mane to shame. In the woods stray burrs stuck to her like magnets and we spent hours clipping them out. Her brain was kinda crazy but her body cute. With maximum charm she’d approach for a head pat and belly rub. It was impossible to say no. If you ignored her she’d paw your arm until compliance. Once fulfilled she’d walk off to do her own thing, usually sit by the porch or sun on the lawn. I respected that she could be alone but still show love. She wasn’t cold or distant, she just knew what her limits were for interaction. Part of that had to do with her ever present anxiety.

Zort was an anxious spazz, nervous around strangers, not afraid to bark at blowing leaves. When little she peed herself if scared or scooped abruptly. When people came by she’d stand at the side of the house and bark, then run to the back porch as they stepped closer. She didn’t do this for hours, just a quick minute before her scamper to safety. She was never mean, not a biter, just worried about everything like my great grandma Nora. Nora wouldn’t let you sit in a rocking chair for fear you’d fly through a window and break your neck. Zort didn’t gamble into her 90s like Nora but it was clear she held her genes of worry.

In part this nervousness came from when she was lost some months after we got her. She followed stray dogs across the frozen river in our front yard to Minnesota. She stayed gone for two winter weeks and it seemed we’d lost another dog too early. We ran an ad in the paper and miraculously someone called. A man found her in his country barn a few miles down river. She survived off cat food but came back paper thin. On her underside the ribs protruded like the last scraps of a chewed down carcass, empty skin but no meat. Normally twenty pounds she was now down to something like thirteen. She was young when that happened and I think it made her anxious and on edge. She never left on her own again despite the endless miles of open countryside at her disposal.

Still Zort had so much happy, weird personality of her own. She was kind, always ready for a belly rub or to be washed in the big bucket on our lawn. She loved our family in her own way and did enough goofy things that my dad called her Straw Brain. She barked at our cars even though she’d seen them hundreds of times. She was prone to humping blankets, pillows, and a stray cat. Zort had a special ability to know when my grandma was over and made sure to give her the full show. One of the funniest habits she developed was running laps around the outside of our house. When excited she’d take off at full speed and make a tight circle around the perimeter three or four times before stopping to pant and stare. We never knew why she did it but I saw her run these circles at least a hundred times.

This spring I was lucky enough to care for her for two months as my parents were away in California. I was using this time at home to think about life and be alone but Zort was there as my companion. The first thing I noticed upon arrival was that she reeked of skunk. It was comically bad, like if life were a cartoon she’d be hounded by storm clouds of stink. Most afternoons I performed saw work in the woods and she’d hang as I cut dead trees and burned them. She’d chew grass then meander to the cement porch where she liked to pass time. At night I’d carry her bed to the TV room for company but in time she’d leave to lay in the hallway. Zort found comfort in the familiar which is why she was at peace on the porch or asleep on our rug.

When I’d drive to town to fetch the morning mail she’d hop in my car and ride along. She loved going for rides, especially on the Polaris Ranger, a cross between a golf cart and four wheeler. She’d sit on the seat to let the wind catch her face and blow her fur. When I hauled trash to my grandma’s dumpster a mile away she always came with, excited for the ride even if it was just a garbage run. Over the years I took her on dozens of rides for hundreds of miles through the country roads, my parents’ farm, and the fields around us at home in North Dakota.

The last time I saw her was in June when my parents returned from their trip. She’d grown thin, lost energy, and moved more like a statue each week. But still she seemed pretty good. For fun I’d put hot dogs on her back and watch her maneuver to snatch and gobble them up. I put one on her leg and when I checked two hours later she hadn’t moved an inch. The hot dog sat stuck to her and she couldn’t be bothered to notice. Even in those two months together I witnessed a decline from my arrival to my parents’ return. No matter how much I made her eat it didn’t stick to her body. When she wasn’t hungry she’d bury food under the peonies in my mother’s flower garden. She showed other signs of sickness. Her groin was purple and slightly swollen, body riddled with skin tags and strange bumps. Our family decided long ago that we’d help her pass before she entered a pain filled decline. That decline was in progress but I didn’t want to admit it. She’d show signs of her old self often, panting, wagging, joining my mom and I for long walks when we coaxed her.

Over the years these walks were the best way to bond with Zort. She’d trek with us for miles through the woods, on our frozen river, or down the gravel roads linking farmsteads in the upper plains. She often followed a foot behind Mom as Zort adored her. Despite her pretty appearance Zort’s ability to do these things diminished as old age pressed against her. She opted more often than not to stay put as we went walking. In this time she settled down, softened out, switched from being a Zort to a Sophie. Everyone noticed that she was pretty chill towards the end.

After two months it was my time to go. I knew she was nearing the end though maybe this wouldn’t be goodbye. She hopped in my car packed full of things because she thought we were going to the post office. I was headed to Oregon and of course couldn’t take her with. I hugged, petted, and kissed her adieu. She walked to the shade of our garage and sat to the cement. I feared this was the last time I’d see her so waved and muttered an I. Love. You. That thought, that this was the end, turned out to be true. She had lymphatic cancer and was put down this Tuesday.

It’s a strange thing to swallow but that’s okay. She lived a free life on a farm with people that loved her. Death is part of the contract when you let a doggy into your life, help them paw their way to the center of your heart. My little sis and I called her Sister Zort because that’s what she felt like to us. She was a part of our family for fourteen years. I won’t miss the stomach churning smell of chicken liver that Mom cooked for Sophie but will miss watching her beg for food or flip for a belly rub. RIP to Zort and all the other dogs in our lives that have brought us joy and love. 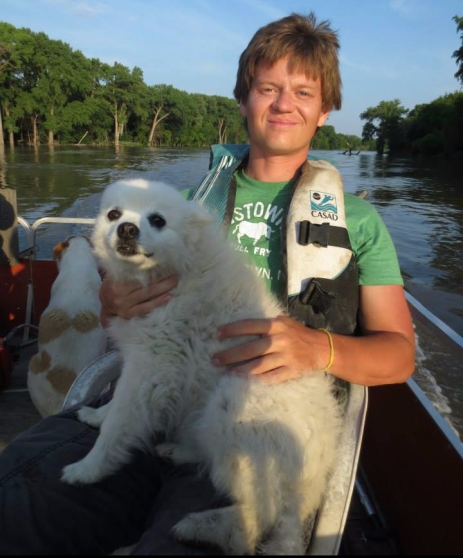 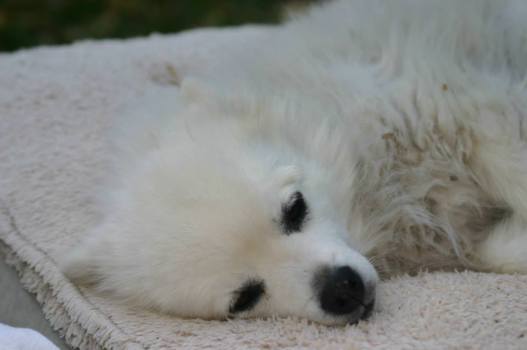 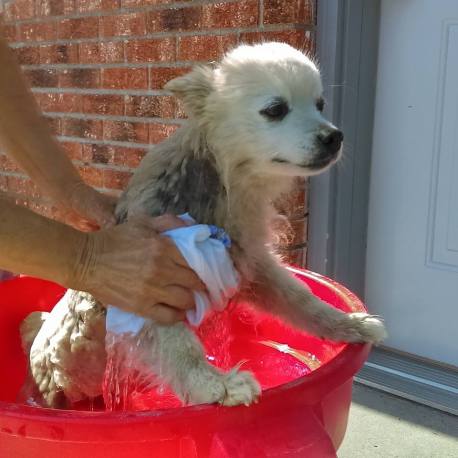 I wrote about my other dead dog here: Big Pappy

The two of them now rest side by side.

gabfrab They are using the management at the YMCA on Huntington Ave to antagonize me. I have reason to believe that in addition to other YMCA-sponsored attacks, artificial storms are being used to attack me and my pet pigs. I documented piglets being stabbed and tossed into piles, large pigs beaten with metal rods, their carcasses dumped in the sand. Visit me for more info.
Published 08/04/201702/20/2020