The dog and I walk past a row of rundown campers. Trash-fucked streets on the far side of the cemetery. The last time I circled these parts I heard a van dweller listening to voicemails on speakerphone. Tonight I see a garbage bag in the middle of the street. As we cross I spot another on the corner.

It’s a black five gallon container with pizza spilling out. The solidified aftermath of an Italian volcano. I dig in and come up with a slice. My tongue registers it as dry and cold but I scavenge and score two more that crumble at my touch.

A man dashes out his car to see if he’s okay but the bum’s just yelling and not currently with this earth. No damage other than the mess in his brain. I look at what he kicked as he passed by. I spot a sandal, boot, and dress shoe, none with matches. I look back to the bum and he’s gone from screaming to crawling to passed out in less than two minutes.

The dog and I walk by my dance spot. I think I’ve found a score of food and booze left in a doorway but after an amble then return a man inhales the loot. We stall in hopes he’ll leave but no go. On the next block I pass a dumpster where a hot ass homeless lady rifles the recycling as her dog rests on the sidewalk. It gets up to sniff my guy so she leaves the trash to retrieve him and apologize. I say no biggie then point toward home.

We approach the cemetery bum and from fifty feet he sits up to spike a bottle to cement, mutter a few words, then pass out once more. Motor functions of body not mind. Homeless chicken with its head cut off. I spot foam plus a pillow further down. Maybe they’re his but he was too fucked to go the extra hundred feet to find his bed. Instead he rests on cement beside his soon to be burial plot.

P.S. I went back the next night and though all the pizza and peanut butter were gone, the dress shoe now had a match. 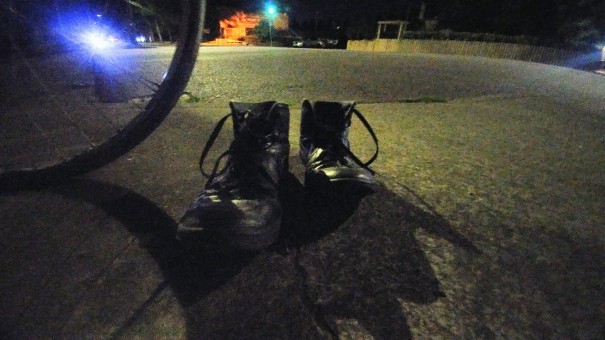 If you like my work and want to support it ways to do so can be found here: https://gabfrab.com/make-a-wish-gross-hobo-edition/

Or you can feed Gabfrab the Money Grub at…